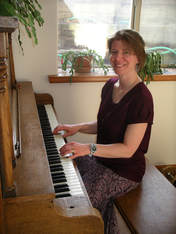 Amy Sebesta Self, composer, musician, and teacher, founded Sing the World Green in 2011. She lives in Boulder, Colorado, and has a passion for children, teaching, and the environment! She has taught elementary general music and conducted choirs since 2003, with a couple of years of middle school and preschool music thrown in. Over the years, she has also taught private lessons on piano, guitar, and recorder in her home studio. She has a Bachelor of Arts degree in Sociology, a Bachelor's degree in music education from CU, and a Master's degree in Music Education from CSU. She is also certified in both the Kodaly and Orff music education methods.

In 2011, Amy began composing children's choral music around issues of living sustainably and caring for our planet. She added environmental stewardship projects for her choirs when a 3rd grade student asked, "We sing a lot about taking care of the Earth, but are we going to do anything about it?"

Rodney Sauer, composer, arranger, musician, and recording engineer, composes piano accompaniments and is the recording engineer for the publishing side of Sing the World Green. ​He lives in Louisville Colorado, and is the pianist and director of the Mont Alto Motion Picture Orchestra. He has scored over 80 silent films, with over 30 recordings for silent films released on DVD. Rodney and his group regularly perform at silent film festivals from coast to coast.

Rodney has also been playing piano and accordion for square and contra dances along Colorado's front range since the late 1980s.  Rodney and Amy started playing music together in the early 1990s in the Boulder Hat Band, a band that played international folk music. Since then, they have occasionally played contra dances, tea dances, and waltz nights together.
Sing the World Green